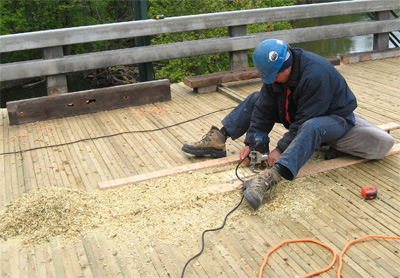 Adding a deck to your house will add to the enjoyment of your house while you add to its value. Deck framing is a procedure that the average DIYer can handle with just a little basic knowledge of general framing. Most localities require a building permit when adding a deck, but the homeowner can build their own deck in most areas. Since some components of deck framing are fairly heavy or at least awkward to handle, having a helper to move and set pieces of the deck is usually required.

Since the deck is exposed to the elements, the wood used in building the deck needs to be weather resistant. Treated lumber, cedar, or redwood are the traditional materials of choice, but new composites like Trex are a great alternative. Each product has its own advantages and disadvantages, so it is a matter of personal preference on which product you should use for your deck.


The foundation of any deck is the concrete pads or footings, (depending on the building code for your climate) on which the framing posts rest. There are many ways to anchor the posts to the base, one of my favorites is an adjustable anchor plate which bolts to the concrete base and can be adjusted sideways or in height to compensate for any slight irregularities in the placing or height of the base. This makes deck framing easier for a beginning deck builder. Any anchoring system should provide drainage or elevate the post off of the base to minimize rot of the bottom of the posts.

After you get the upright posts set into position, the supporting beams of the deck need to be attached to the posts. There are several ways to accomplish this, but the simplest way is with specially formed metal connectors designed to securely attach posts and beams. Standard building codes require specific minimum size of beams to support the deck across various spans, so contact your local building department if you are not familiar with the code requirements. The entire deck structure also needs to be attached to the house by a ledger plate which is firmly attached with lag bolts or long screws.

The deck joists are attached to the beams with joist hangers, in the same manner as standard floor joists are hung from the rim joist in standard floor framing. Up to this point in building your deck every component is primarily functional. The decking itself is where you can make your artistic statement.

The decking of most decks is plain boards laid out in a perpendicular orientation to the joists. But you can design your deck in almost any pattern that you wish: diagonal, circular, herringbone, or any number of other patterns. Some of the cuts for these designs can be tricky, but modern technology has solved this problem, too. You can take your design to a deck manufacturer, and they can computerize your design, cutting the individual pieces with computer controlled saws, so that all you have to do is put the design together on your deck.

The final step in building your deck is placing the railing around the deck. The spindles need to be a maximum of 4″ apart and fastened to the rim joist with at least two screws or nails. This is not only common building code regulation, but just plain good safety. Keeping the spindles or bannisters narrow prevents kids from sticking their heads through! Top off the spindles with a top rail and your deck will be finished.

Christen your new deck with a party. Invite over your friends to enjoy your new deck, while you bore them with the details of how you built it yourself.

Garden Structures, some pretty elaborate backyard structures and decks. Maybe not entirely appropriate for small houses, but it may inspire details in your next project.

Accent Deck Designs. Interesting pergolas and arbors to integrate with a deck.

Building a Deck. Some more considerations in building a deck, like dealing with sun, wind, rain, and snow.

Decks.com – good basic info on deck design and construction. Also talks about under-deck drainage to prevent rain going straight through the deck (if you need to avoid that).